Madrid, Spain, 9 December 2019   At the United Nations Climate Change Conference wrapping up in Madrid, Spain this week, the Grenada team joined many other countries particularly from other small island developing states around the world in continuing to urge world leaders to act much faster and to do much more to address climate… 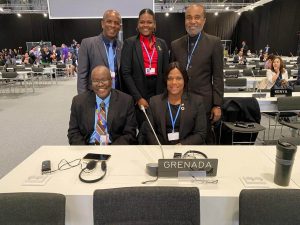 At the United Nations Climate Change Conference wrapping up in Madrid, Spain this week, the Grenada team joined many other countries particularly from other small island developing states around the world in continuing to urge world leaders to act much faster and to do much more to address climate change.

Countries like Grenada are particularly at risk to the impacts of climate change. Climate change describes the effects we are experiencing on Earth due to the consistent warming of the planet mainly because of human activities such as the burning of fossil fuels namely coal, oil and gas. Stronger storms and hurricanes; increasing number of droughts and flood events; and hotter days and hotter nights are just some of the consequences we are currently facing, and these effects are expected to worsen significantly as temperatures continue to rise. At the same time, Grenada is among those countries much less able to cope with these immediate and anticipated changes that threaten lives, jobs and properties. 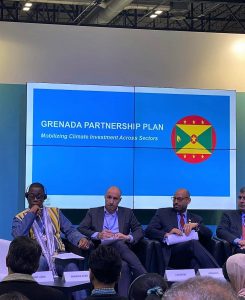 Climate Resilience and the Environment Minister Simon Stiell was clear that Grenada will continue to be a global leader on the issue, remaining committed to doing its part to deliver climate action nationally and meeting its obligations under the Paris Agreement. Minister Stiell leads the national delegation to the 25th meeting of the COP where negotiations are ongoing. Key topics include ‘Article 6’, which deals with the rules for market and non-market instruments to reduce  gases that cause global warming released into the atmosphere and the structure to deal with ‘loss and damage’, which is a term that refers to irreversible harm caused by sudden events like hurricanes and slower processes such as land loss due to sea level rise.

This year’s climate change meeting – known as COP25 – is a critical stepping-stone as we move towards the official start date of the Paris Agreement in 2020 and towards governments worldwide fulfilling their promises to take greater action to limit global warming to 2°C and hopefully further to 1.5°C. Current global temperatures are already around 1°C. 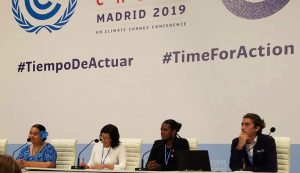 Youth representative, Renae Baptiste, joined other young people from small islands urging world leaders to step up and do their part.

Youth Representative on the delegation, Ms Renae Baptiste encourages all young people in Grenada to learn more and get involved since the reality of climate change has serious implications not just for our futures but our quality of life now. She said: “We are the last generation that can end and change the course of climate change and the first that will face and have to live with the devastating consequences of this crisis.”

The Conference of Parties, COP, is the main gathering where member countries to the international climate agreements meet to discuss and make decisions on the worldwide response for addressing climate change. It is the only forum on the climate crisis where the opinions and concerns of the poorest country are treated the same as that of the biggest economies, such as the US and China. Agreement can only come by consensus, which gives COP decisions global authority.