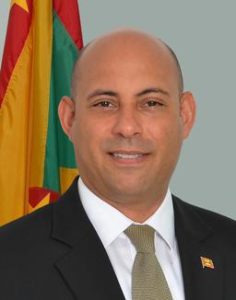 Minister of Climate Resilience, Sen. the Hon. Simon Stiell, emphasised once again the need for greater global climate ambition and increased support for small island developing states like Grenada and other CARICOM Member States. He delivered these remarks at a CARICOM Ministerial roundtable meeting held on Thursday 27th August 2020 with the incoming president of the United Nations Climate Change Conference from the United Kingdom.

Grenada joined other Caribbean countries to engage in discussions with the COP President Designate, Secretary of State Alok Sharma on key priorities to be tackled at the next climate change conference. The 2021 United Nations Climate Change Conference, also known as COP26, was initially planned for November 2020. However, due to the global COVID-19 pandemic, it is now  scheduled to be held in Glasgow, Scotland from 1 to 12 November 2021 under the presidency of the United Kingdom Government partnered with the Government of Italy for key preparatory meetings such as a Youth Event and the Pre-COP Summit.

The Caribbean region continues to be seriously impacted by climate change and in a manner that is vastly out of proportion to their overall contribution to global carbon emissions. Experts widely agree that human activities such as burning fossil fuels, deforestation and other poor practices are the main reasons behind rising global temperatures. In countries like Grenada, the effects of these increasing temperatures are already being experienced, including reduced rainfall and changing rainfall patterns; increased flooding and coastal erosion; longer and harsher droughts; and more frequent and severe hurricanes and storm surges.

Recognising the critical importance of the issue to the region, and in an effort to ensure that momentum for climate change action is not lost among the many challenges of 2020, the British Government expressed interest in collaborating with CARICOM to ensure progress on matters related to climate finance; adaptation and resilience; and energy transition ahead of COP26.

In closing the exchanges, Minister Stiell called for a more holistic approach to addressing access to finance particularly for countries of the Caribbean, the vast majority of which carry the label of middle- to high-income which excludes their consideration under many traditional development financing structures. In addition, he also invited the COP26 Presidency to make use of the strong presence and continued leadership demonstrated by CARICOM and other small islands to seek a more ambitious outcome in 2021, and strongly encouraged President Designate Sharma to ensure that the negotiation process will be both meaningful and inclusive.