From July 5 – 7, 2022 the Caribbean NDC Finance Initiative (NDCFI) hosted its second NDC Investment Forum in Saint Lucia. The NDCFI is a joint initiative of the Organisation of Eastern Caribbean States (OECS) Commission and the Government of Saint Lucia that was established with the support of the United Nations Framework Convention on… 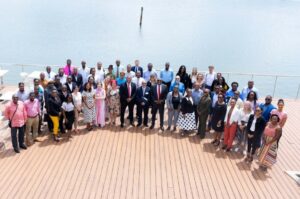 From July 5 – 7, 2022 the Caribbean NDC Finance Initiative (NDCFI) hosted its second NDC Investment Forum in Saint Lucia. The NDCFI is a joint initiative of the Organisation of Eastern Caribbean States (OECS) Commission and the Government of Saint Lucia that was established with the support of the United Nations Framework Convention on Climate Change (UNFCCC) and under the auspices of the NDC Partnership, with initial funding from the Deutsche Gesellschaft für Internationale Zusammenarbeit (GIZ). The aim of the forum was to discuss and find strategies together with partners to advance and accelerate the implementation of Nationally Determined Contributions (NDCs) in the Eastern Caribbean region and related commitments of OECS Member States.

On the second day of the event, the Caribbean component of the GIZ project “Global Carbon Market” (GCM), founded by the German Federal Ministry of Economic Affairs and Climate Action (BMWK), organized a working session with the title “Enabling access to carbon markets: Objectives, opportunities and policy options”.

The working session was opened by a short introduction of the GCM Project and its work in the region by Dr. Annett Fleischer. Following this, the expert David Colín from the carbon pricing consultancy MexiCO2 gave a basic overview over the topic of Carbon Pricing including Carbon Tax, Carbon Markets and Carbon Credits. This presentation was concluded with the examination of a case study on photovoltaic systems and their integration into Carbon Markets. The third presentation of the session was held by Patrick Munyaneza (GCM) who provided a deeper look into GCM’s work and its cooperation with the governments of Saint Lucia and Grenada as well as the OECS Commission. Munyaneza also gave insights on how Carbon Markets are supposed to operate under Article 6 of the Paris Agreement and on the relevance of this for the region. The last presentation of the session was held by Paula Prufmann from Allcot, a project developer under the Article 6 umbrella, thematizing Alcot’s work on projects on nature-based and technology-based solutions.

The session was concluded with a lively discussion. Points of discussion were, among others, the current knowledge of the public sector on Article 6 mechanisms and how to improve it, the importance of blue carbon, the role of mangroves for carbon sequestration and the potential of sargassum seaweed for biofuel (all viewed under the lens of Article 6 mechanisms). Participants and organizers alike concluded that the best way forward is a collective regional approach that combines the involvement of different relevant stakeholders from climate change, energy, NDA, environment, and finance. After the session organizers and participants continued to exchange experiences and established contacts for future cooperation on Carbon Markets in the Caribbean.